Exon skipping uses antisense oligonucleotides as a treatment for genetic diseases. The antisense oligonucleotides used for exon skipping are designed to bypass premature stop codons in the target RNA and restore reading frame disruption. Exon skipping is currently being tested in humans with dystrophin gene mutations who have Duchenne muscular dystrophy. For Duchenne muscular dystrophy, the rationale for exon skipping derived from observations in patients with naturally occurring dystrophin gene mutations that generated internally deleted but partially functional dystrophin proteins. We have now expanded the potential for exon skipping by testing whether an internal, in-frame truncation of a transmembrane protein γ-sarcoglycan is functional. We generated an internally truncated γ-sarcoglycan protein that we have termed Mini-Gamma by deleting a large portion of the extracellular domain. Mini-Gamma provided functional and pathological benefits to correct the loss of γ-sarcoglycan in a model, in heterologous cell expression studies, and in transgenic mice lacking γ-sarcoglycan. We generated a cellular model of human muscle disease and showed that multiple exon skipping could be induced in RNA that encodes a mutant human γ-sarcoglycan. Since Mini-Gamma represents removal of 4 of the 7 coding exons in γ-sarcoglycan, this approach provides a viable strategy to treat the majority of patients with γ-sarcoglycan gene mutations. 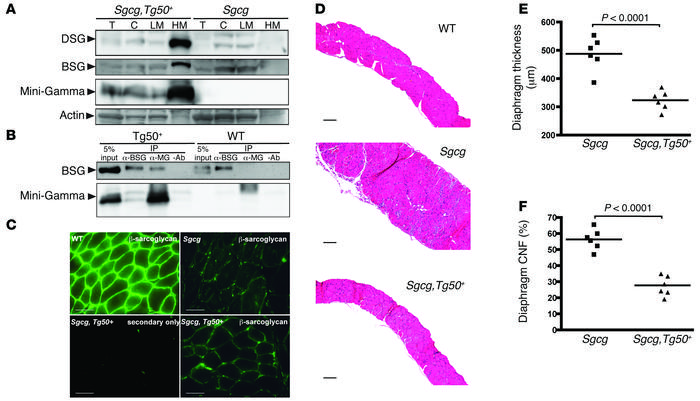 () In the absence of γ-sarcoglycan, β- and δ-sarcoglycan content in the heavy microsomal fraction is reduced due to impaired sarcolemma targeting, consistent with previous reports (). In mice, β- and δ-sarcoglycan protein levels were increased in the heavy microsomal fraction compared with those from muscle without the Mini-Gamma transgene. () Co-IP from the heavy microsomal fraction was performed to test the interaction between Mini-Gamma and other sarcoglycans in vivo. Mini-Gamma was precipitated using an antibody against β-sarcoglycan (α-BSG). The Xpress tag antibody to Mini-Gamma (α-MG) also resulted in precipitation of β-sarcoglycan. () Mini-Gamma expression improves β-sarcoglycan targeting to the sarcolemma. High-magnification imaging shows improved β-sarcoglycan localization in the presence of Mini-Gamma. Scale bars: 50 μm. () Mini-Gamma improves diaphragm muscle pathology in mice. The diaphragm muscle is severely affected by the dystrophic process in mice, as it is in other mouse models of muscular dystrophy, and this is seen as marked thickening, referred to as pseudohypertrophy (). Scale bar: 100 μm. () In mice, the thickness of the diaphragm muscle was reduced. () Centrally nucleated fibers (CNF), another feature of dystrophic muscle, are increased in mice, reflecting increased pathological regeneration. The percentage of centrally nucleated fibers was reduced in diaphragm muscle from mice compared with mice, consistent with reduced degeneration and therefore a decreased need for regeneration. Student’s test was used to compare results between 2 groups.