MHC molecules bind antigenic peptides and present them to T cells. There is a growing body of evidence that MHC molecules also serve other functions. We and others have described synthetic peptides derived from regions of MHC molecules that inhibit T-cell proliferation or cytotoxicity in an allele-nonspecific manner that is independent of interaction with the T-cell receptor. In this report, we describe the mechanism of action of a synthetic MHC class II–derived peptide that blocks T-cell activation induced by IL-2. Both this peptide, corresponding to residues 65–79 of DQA*03011 (DQ 65-79), and rapamycin inhibit p70 S6 kinase activity, but only DQ 65-79 blocks Akt kinase activity, placing the effects of DQ 65-79 upstream of mTOR, a PI kinase family member. DQ 65-79, but not rapamycin, inhibits phosphatidylinositol 3-kinase (PI 3-kinase) activity in vitro. The peptide is taken up by cells, as demonstrated by confocal microscopy. These findings indicate that DQ 65-79 acts as an antagonist with PI 3-kinase, repressing downstream signaling events and inhibiting proliferation. Understanding the mechanism of action of immunomodulatory peptides may provide new insights into T-cell activation and allow the development of novel immunosuppressive agents. 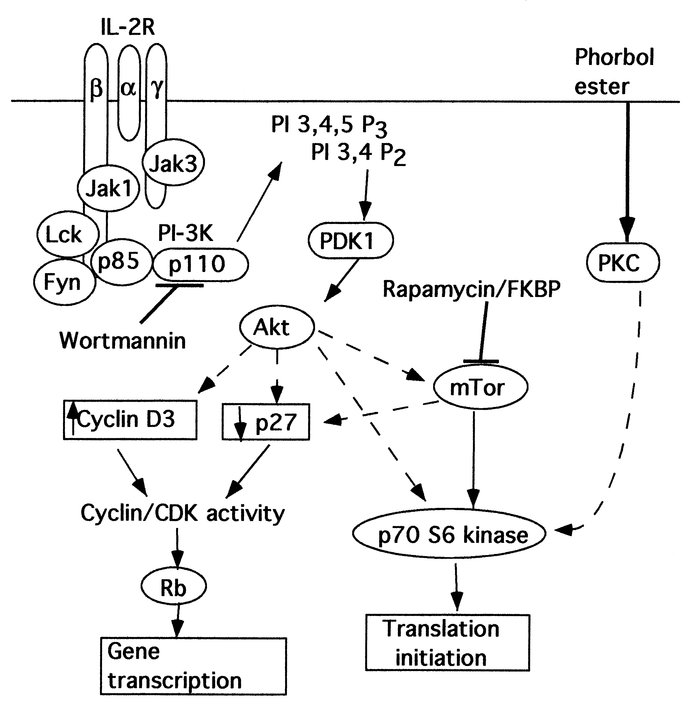