Beckwith-Wiedemann syndrome (BWS) is a human stem cell disorder, and individuals with this disease have a substantially increased risk (~800-fold) of developing tumors. Epigenetic silencing of β2-spectrin (β2SP, encoded by ), a SMAD adaptor for TGF-β signaling, is causally associated with BWS; however, a role of TGF-β deficiency in BWS-associated neoplastic transformation is unexplored. Here, we have reported that double-heterozygous mice, which have defective TGF-β signaling, develop multiple tumors that are phenotypically similar to those of BWS patients. Moreover, tumorigenesis-associated genes and telomerase reverse transcriptase () were overexpressed in fibroblasts from BWS patients and TGF-β–defective mice. We further determined that chromatin insulator CCCTC-binding factor (CTCF) is TGF-β inducible and facilitates TGF-β–mediated repression of transcription via interactions with β2SP and SMAD3. This regulation was abrogated in TGF-β–defective mice and BWS, resulting in overexpression. Imprinting of the locus and the locus on chromosome 11p15.5 is mediated by CTCF, and this regulation is lost in BWS, leading to aberrant overexpression of growth-promoting genes. Therefore, we propose that loss of CTCF-dependent imprinting of tumor-promoting genes, such as and , results from a defective TGF-β pathway and is responsible at least in part for BWS-associated tumorigenesis as well as sporadic human cancers that are frequently associated with and mutations.

Disruption of TGF-β pathway in mice and BWS cells. 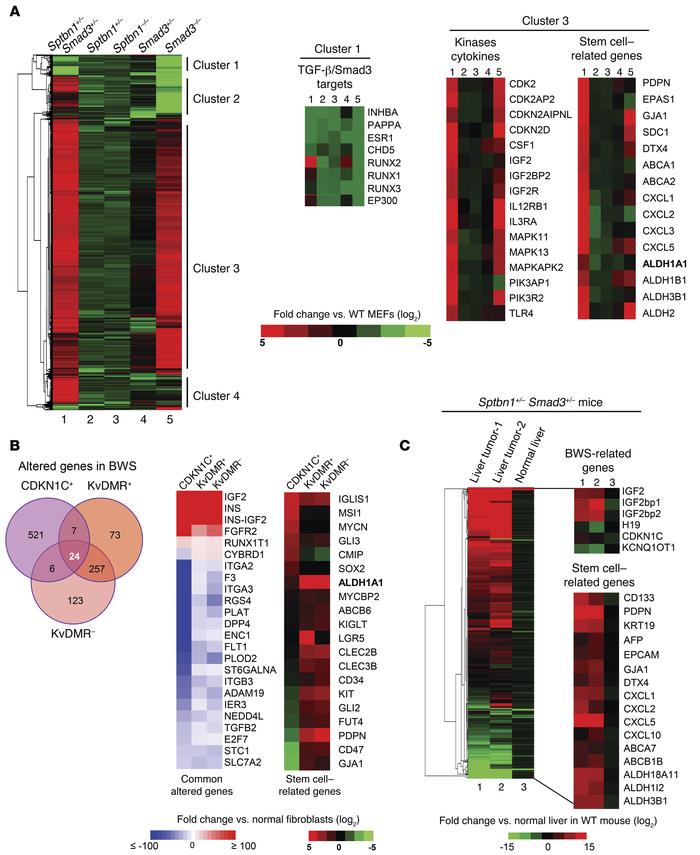 () Heat map comparisons of gene-expression profiles from MEFs from , , , , and versus wild-type MEFs. The mRNA alterations were classified by hierarchical clustering. Representative gene expressions in cluster 1 and cluster 3 are shown (cutoff, < 0.05). () Common altered genes and stemness profiles in the 3 BWS cell lines CDKN1C+, KvDMR+, and KvDMR–. Whole-transcriptome RNA sequencing data of BWS cell lines were analyzed by IPA (cutoff, value < 0.3). The Venn diagram shows the altered genes in BWS cells (left panel). Twenty-four commonly altered genes are presented on a heat map (right panel). () The expression of BWS- and stem cell–associated genes in mouse liver tumors. Two spontaneous liver tumors from 2 individual mice, normal liver tissue from an mouse, and normal liver tissue from a wild-type mouse were used for whole-transcriptome RNA sequencing analyses, and the data are displayed as a heat map comparing the gene-expression profiles: liver tumor-1, liver tumor-2, and normal liver from mice versus normal liver from wild-type mice. The mRNA alterations were classified by hierarchical clustering.