Insulin resistance is commonly observed both in overt diabetes and in individuals prone to, but not yet manifesting, diabetes. Hence the maintenance or restoration of insulin sensitivity may prevent the onset of this disease. We previously showed that homozygous disruption of insulin receptor substrate-1 (IRS-1) in mice resulted in insulin resistance but not diabetes. Here, we have explored the mechanism of systemic insulin resistance in these mice and used adenovirus-mediated gene therapy to restore their insulin sensitivity. Mice expressing the IRS-1transgene showed almost normal insulin sensitivity. Expression of an IRS-1 mutant (IRS-1Δp85) lacking the binding site for the p85 subunit of phosphatidylinositol 3-kinase (PI3K) also restored insulin sensitivity, although PI3K is known to play a crucial role in insulin’s metabolic responses. Protein kinase B (PKB) activity in liver was decreased in null mice compared with the wild-type and the null mice expressing IRS-1 or IRS-1Δp85. In primary hepatocytes isolated from null mice, expression of IRS-1 enhanced both PI3K and PKB activities, but expression of IRS-1Δp85 enhanced only PKB. These data suggest that PKB in liver plays a pivotal role in systemic glucose homeostasis and that PKB activation might be sufficient for reducing insulin resistance even without full activation of PI3K. 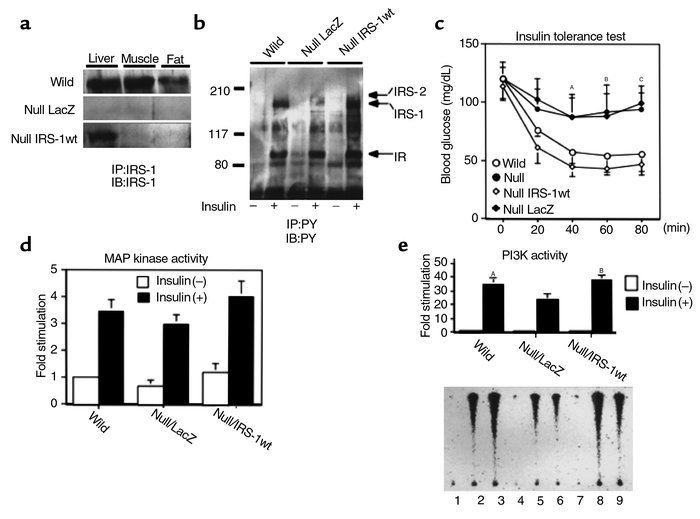