Oxidative damage and inflammation are both implicated in the genesis of hypertension; however, the mechanisms by which these stimuli promote hypertension are not fully understood. Here, we have described a pathway in which hypertensive stimuli promote dendritic cell (DC) activation of T cells, ultimately leading to hypertension. Using multiple murine models of hypertension, we determined that proteins oxidatively modified by highly reactive γ-ketoaldehydes (isoketals) are formed in hypertension and accumulate in DCs. Isoketal accumulation was associated with DC production of IL-6, IL-1β, and IL-23 and an increase in costimulatory proteins CD80 and CD86. These activated DCs promoted T cell, particularly CD8+ T cell, proliferation; production of IFN-γ and IL-17A; and hypertension. Moreover, isoketal scavengers prevented these hypertension-associated events. Plasma F2-isoprostanes, which are formed in concert with isoketals, were found to be elevated in humans with treated hypertension and were markedly elevated in patients with resistant hypertension. Isoketal-modified proteins were also markedly elevated in circulating monocytes and DCs from humans with hypertension. Our data reveal that hypertension activates DCs, in large part by promoting the formation of isoketals, and suggest that reducing isoketals has potential as a treatment strategy for this disease. 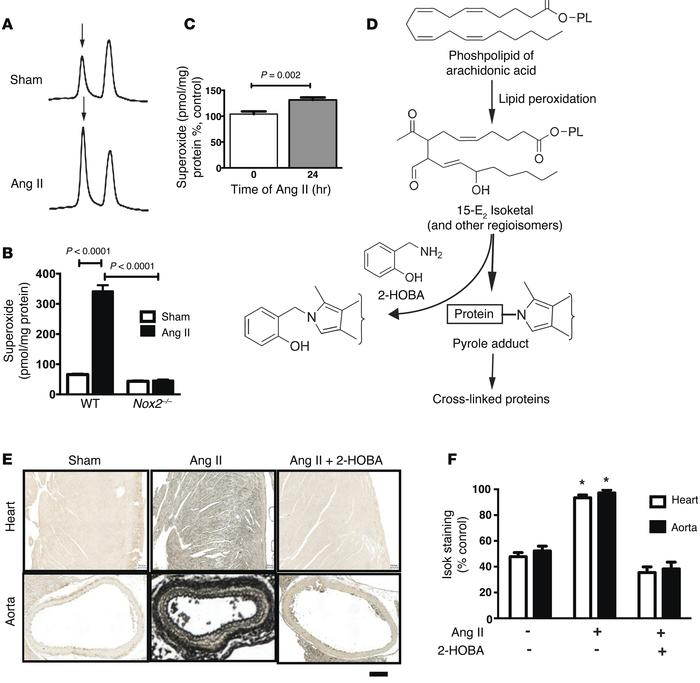 () WT and mice received angiotensin II or sham infusions for 2 weeks, and CD11c+ cells were isolated from the spleens. O2η– was determined using HPLC to monitor conversion of dihydroethidium to the O2η– oxidation adduct 2-hydroxyethidium, as indicated by the first peak (arrows) of the HPLC tracings. () Quantification of O2η– in WT and mice ( = 6). () O2η– was measured in DCs at either baseline or following 24 hours of angiotensin II treatment in vitro (100 nM) ( = 7). () Pathway illustrating lipid peroxidation and formation of isoketals. The isoketals react with lysine residues on proteins forming lactam adducts that cross-linked proteins. This process is prevented by scavenging with 2-HOBA. () Immunohistochemistry of heart and aortic sections showing accumulation of isoketals in hypertension using a single-chain antibody that recognizes isoketal-lysine adducts on all proteins (scale bar: 100 μm). () Quantification of isoketals in the hearts and aortas ( = 6–7, * < 0.05).