Single-minded 1 (SIM1) is a basic helix-loop-helix transcription factor involved in the development and function of the paraventricular nucleus of the hypothalamus. Obesity has been reported in haploinsufficient mice and in a patient with a balanced translocation disrupting . We sequenced the coding region of in 2,100 patients with severe, early onset obesity and in 1,680 controls. Thirteen different heterozygous variants in were identified in 28 unrelated severely obese patients. Nine of the 13 variants significantly reduced the ability of SIM1 to activate a SIM1-responsive reporter gene when studied in stably transfected cells coexpressing the heterodimeric partners of SIM1 (ARNT or ARNT2). variants with reduced activity cosegregated with obesity in extended family studies with variable penetrance. We studied the phenotype of patients carrying variants that exhibited reduced activity in vitro. Variant carriers exhibited increased ad libitum food intake at a test meal, normal basal metabolic rate, and evidence of autonomic dysfunction. Eleven of the 13 probands had evidence of a neurobehavioral phenotype. The phenotypic similarities between patients with SIM1 deficiency and melanocortin 4 receptor (MC4R) deficiency suggest that some of the effects of SIM1 deficiency on energy homeostasis are mediated by altered melanocortin signaling.

Identification of SIM1 variants in this study. 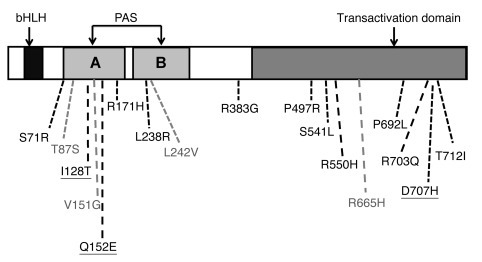 Schematic of the domain structure of the human SIM1 protein. SIM1 variants identified in GOOS patients only (black), controls only (gray), and in both patients and controls (underlined) are shown.