Pannexin-1 (Panx1) plays a role in the release of ATP and glutamate in neurons and astrocytes. Panx1 can be opened at the resting membrane potential by extracellular ATP via the P2X7 receptor (P2X7R). Panx1 opening has been shown to induce neuronal death and aberrant firing, but its role in neuronal activity has not been established. Here, we report the role of the P2X7R-Panx1 complex in regulating muscarinic acetylcholine 1 (M1) receptor function. P2X7R knockout (P2X7–/–) mice showed greater susceptibility to seizures induced by pilocarpine (PILO), an M1 receptor agonist, than their WT littermates, despite having similar levels of hippocampal M1 receptor expression. This hypersensitivity to PILO in the P2X7–/– mice did not involve the GABA or glutamate system. Both administration of P2X7R antagonists and gene silencing of P2X7R or Panx1 in WT mice increased PILO-induced seizure susceptibility in a process mediated by PKC via intracellular Ca2+ release. Therefore, we suggest that the P2X7R-Panx1 complex may play an important role as a negative modulator of M1 receptor–mediated seizure activity in vivo.

Behavioral seizure activity of convulsants in WT and mice. 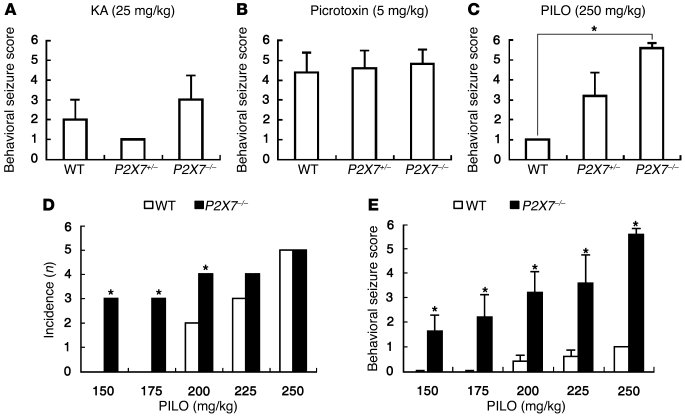