In a strategy to specifically target complement inhibitors to sites of complement activation and disease, recombinant fusion proteins consisting of a complement inhibitor linked to a C3 binding region of complement receptor (CR) 2 were prepared and characterized. Natural ligands for CR2 are C3 breakdown products deposited at sites of complement activation. Fusion proteins were prepared consisting of a human CR2 fragment linked to either the N terminus or C terminus of soluble forms of the membrane complement inhibitors decay accelerating factor (DAF) or CD59. The targeted complement inhibitors bound to C3-opsonized cells, and all were significantly more effective (up to 20-fold) than corresponding untargeted inhibitors at protecting target cells from complement. CR2 fusion proteins also inhibited CR3-dependent adhesion of U937 cells to C3 opsonized erythrocytes, indicating a second potential anti-inflammatory mechanism of CR2 fusion proteins, since CR3 is involved in endothelial adhesion and diapedesis of leukocytes at inflammatory sites. Finally, the in vivo validity of the targeting strategy was confirmed by the demonstration that CR2-DAF, but not soluble DAF, targets to the kidney in mouse models of lupus nephritis that are associated with renal complement deposition. 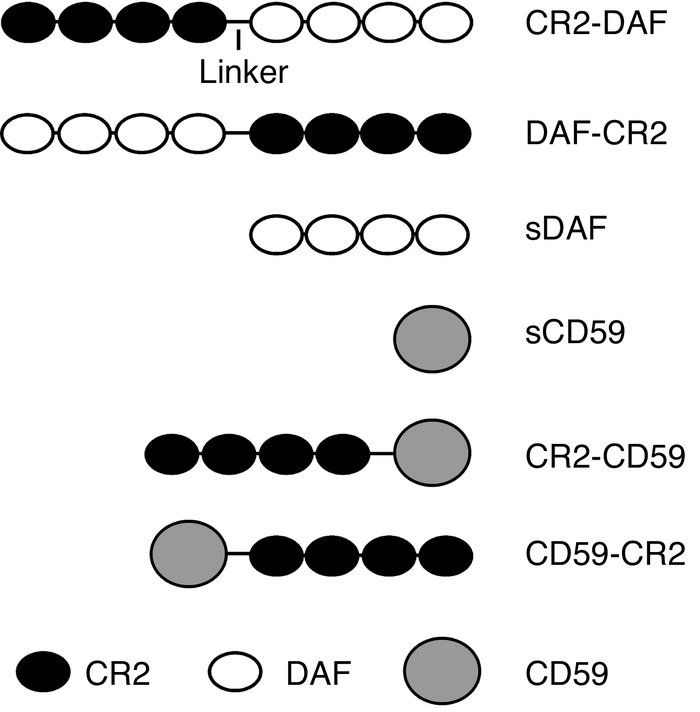