A “hotspot” for autoimmune T cells in type 1 diabetes

A “hotspot” for autoimmune T cells in type 1 diabetes

The ability of a single T cell antigen receptor (TCR) to cross-react with multiple antigens allows the finite number of T cells within an organism to respond to the compendium of pathogen challenges faced during a lifetime. Effective immune surveillance, however, comes at a price. TCR cross-reactivity can allow molecular mimics to spuriously activate autoimmune T cells; it also underlies T cell rejection of organ transplants and drives graft-versus-host disease. In this issue of the , Cole and colleagues provide insight into how an insulin-reactive T cell cross-reacts with pathogen-derived antigens by focusing on a limited portion of the peptides to provide a hotspot for binding. These findings dovetail with recent studies of alloreactive and autoimmune TCRs and suggest that the biochemical principles that govern conventional protein-protein interactions may allow the specificity and cross-reactivity profiles of T cells to be predicted. 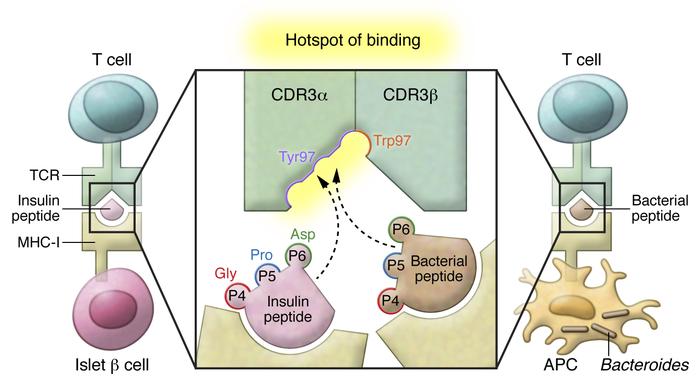 The 1E6 T cell was derived from an individual with type 1 diabetes and recognizes an insulin peptide. In this issue, Cole, Bulek, and colleagues reveal that the TCR of the 1E6 T cell also recognized molecular mimics derived from bacteria, such as species of . Further characterization of these interactions revealed that the 1E6 TCR binds multiple ligands that use the same hotspot of binding (see insert) that forms between TCR residues (Tyr97 of CDR3α and Trp97 of CDR3β) and Gly, Pro, and Asp residues within the insulin peptide and the molecular mimics at P4, P5, and P6 (see insert).