We have tracked the in vivo migration and have identified in vivo correlates of cytotoxic T-lymphocyte (CTL) activity in HIV-seropositive subjects infused with autologous gene-marked CD8+ HIV-specific CTL. The number of circulating gene-marked CTL ranged from 1.6 to 3.5% shortly after infusion to less than 0.5% 2 weeks later. Gene-marked CTL were present in the lymph node at 4.5- to 11-fold excess and colocalized within parafollicular regions of the lymph node adjacent to cells expressing HIV tat fusion transcripts, a correlate of virus replication. The CTL clones expressed the CCR5 receptor and localized among HIV-infected cells expressing the ligands MIP-1α and MIP-1β, CC-chemokines produced at sites of virus replication. Aggregates of apoptotic cells and cells expressing granzyme-B localized within these same sites. In contrast, lymph node sections from untreated HIV-seropositive subjects, all with significant viral burden (> 50,000 HIV RNA copies/mL plasma), showed no CC-chemokine expression and exhibited only sporadic and randomly distributed cells expressing granzymes and/or apoptotic cells. These studies show that the infused CTL specifically migrate to sites of HIV replication and retain their antigen-specific cytolytic potential. Moreover, these studies provide a methodology that will facilitate studies of both the magnitude and functional phenotype of Ag-specific CD8+ T cells in vivo. 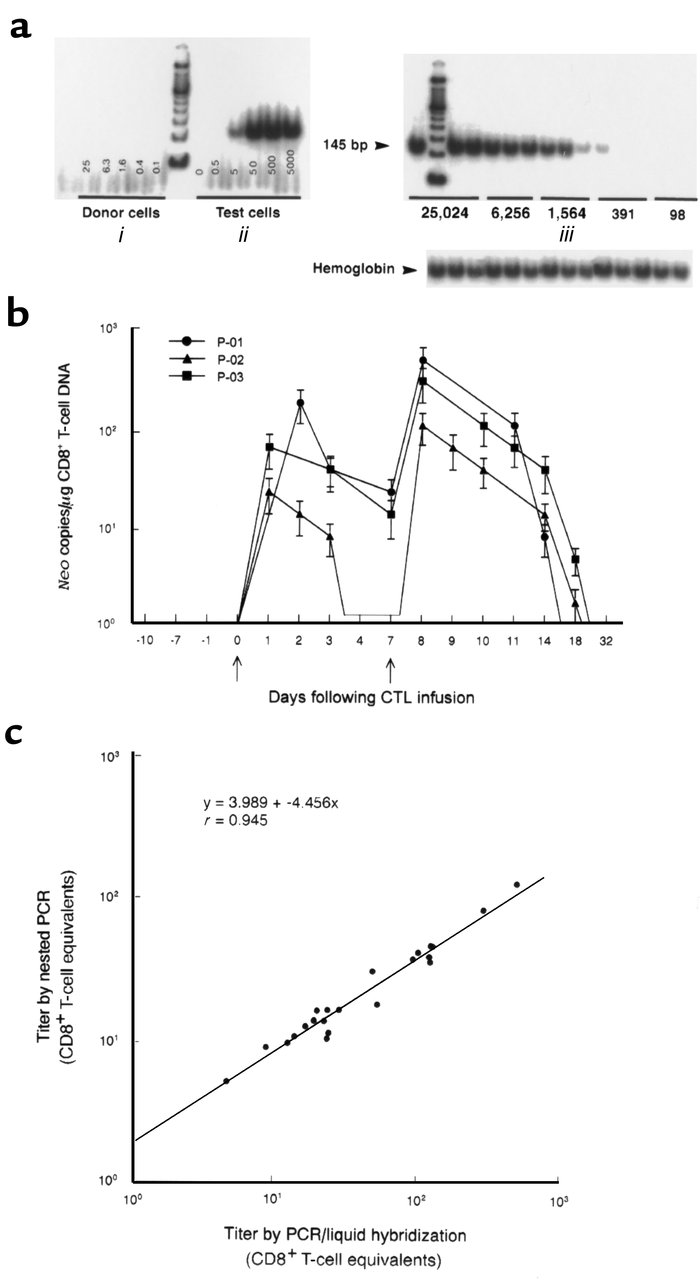 Analysis of PBMC for the in vivo persistence of -transduced CD8+-specific T cells. () Limiting dilution PCR and 32P liquid hybridization strategy for DNA in PBMC lysates. () The titration curve in an HIV-seronegative (uninfused) individual. All lanes are negative. () Illustration of the dilution curve containing DNA extracted from 0 to 5,000 cloned CD8+ T cells transduced with one copy of the gene. The cells were diluted into PBMC of an untreated donor to equalize the cellular DNA in all wells. The assay is capable of detecting as few as 5 copies (5 positive cells) per microgram of PBMC DNA. Independent determinations of the frequency of -modified cells varied up to 0.5 log. () Serial dilutions of PBMC from a patient who received the second infusion of -modified T cells (3.3 × 109 cells/m2) 24 hours earlier (patient 1). Endpoint dilution analysis indicates a titer of 2,558 infused -positive cells/106 PBMC (1 in 391 PBMC). Negative controls consisted of DNA extracted from PBMC before CTL infusions. All samples were positive for the β-hemoglobin gene. () Using a single-round PCR and liquid hybridization strategy, the in vivo persistence of -marked T cells was assessed in peripheral blood collected before, during, and after adoptive transfer. The absolute number of CD8+ T cells in PBMC was determined by flow cytometry for each time point. Data points indicate mean ± SEM and represent the number of copies per microgram of CD8+ T-cell DNA. Arrows indicate the day of -marked T-cell infusions. All samples were run in triplicate, and all assays were repeated at least twice. () Comparison of PCR/liquid hybridization strategy (described above) with nested PCR in clinical samples, as described in Methods.