The success of a non-live vaccine requires improved formulation and adjuvant selection to generate robust T cell immunity following immunization. Here, using protein linked to a TLR7/8 agonist (conjugate vaccine), we investigated the functional properties of vaccine formulation, the cytokines, and the DC subsets required to induce protective multifunctional T cell immunity in vivo. The conjugate vaccine required aggregation of the protein to elicit potent Th1 CD4+ and CD8+ T cell responses. Remarkably, the conjugate vaccine, through aggregation of the protein and activation of TLR7 in vivo, led to an influx of migratory DCs to the LN and increased antigen uptake by several resident and migratory DC subsets, with the latter effect strongly influenced by vaccine-induced type I IFN. Ex vivo migratory CD8–DEC205+CD103–CD326– langerin-negative dermal DCs were as potent in cross-presenting antigen to naive CD8+ T cells as CD11c+CD8+ DCs. Moreover, these cells also influenced Th1 CD4+ T cell priming. In summary, we propose a model in which broad-based T cell–mediated responses upon vaccination can be maximized by codelivery of aggregated protein and TLR7/8 agonist, which together promote optimal antigen acquisition and presentation by multiple DC subsets in the context of critical proinflammatory cytokines.

OVA vaccines induce distinct changes in the composition of DCs within the DLN. 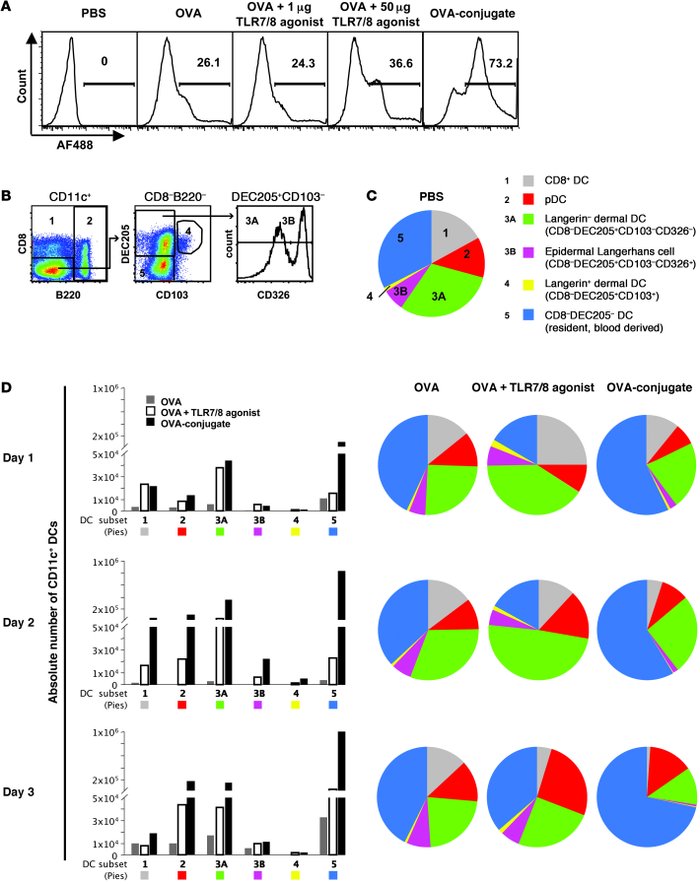 () Comparison of uptake of AF488-labeled OVA-conjugate (OVA-conj.) versus AF488-labeled OVA, with or without varying amounts of free TLR7/8 agonist 48 hours after immunization in Balb/c mice. Numbers within histograms refer to the percentages of CD11c+ DCs that took up the AF488-labeled OVA protein. Data are representative of 2 independent experiments. () Following enrichment of CD11c+ DCs from B6 mice (Supplemental Figure 1A), cells were divided into CD8+ DCs (subset 1) and pDCs (subset 2) based on their expression of CD8 and B220. B220–CD8– DCs were further categorized as DEC205+CD103+ (subset 4), DEC205+CD103–, and DEC205–CD103– (subset 5) DC populations based on their expression of CD103 and DEC205, and DEC205+CD103– cells were further divided into CD326-positive (Epcam-positive) (subset 3B) and -negative populations (subset 3A). () Proportions of the different DC subpopulations in LNs of PBS-treated mice. Each DC subset was assigned a number and color based on the gating strategy depicted in . Phenotypic descriptions of the subsets with the matching color codes are shown. The pie chart shows the relative percentage of each DC subset within the total CD11c+ DC population. Data were collected from pooled DLNs of 10 immunized mice. () Absolute numbers of cells in different DC subpopulations analyzed at different time points after immunization with either OVA, OVA plus free TLR7/8 agonist, or OVA-conjugate ( = 10 mice/group). The distribution of the CD11c+ DC subpopulations in the DLNs is presented as absolute number and the relative proportion (pie charts) of each DC subset at various times after immunization.