Fibrosis is a prevalent pathological condition arising from the chronic activation of fibroblasts. This activation results from the extensive intercellular crosstalk mediated by both soluble factors and direct cell-cell connections. Prominent among these are the interactions of fibroblasts with immune cells, in which the fibroblast–mast cell connection, although acknowledged, is relatively unexplored. We have used a Tg mouse model of skin fibrosis, based on expression of the transcription factor Snail in the epidermis, to probe the mechanisms regulating mast cell activity and the contribution of these cells to this pathology. We have discovered that Snail-expressing keratinocytes secrete plasminogen activator inhibitor type 1 (PAI1), which functions as a chemotactic factor to increase mast cell infiltration into the skin. Moreover, we have determined that PAI1 upregulates intercellular adhesion molecule type 1 (ICAM1) expression on dermal fibroblasts, rendering them competent to bind to mast cells. This heterotypic cell-cell adhesion, also observed in the skin fibrotic disorder scleroderma, culminates in the reciprocal activation of both mast cells and fibroblasts, leading to the cascade of events that promote fibrogenesis. Thus, we have identified roles for PAI1 in the multifactorial program of fibrogenesis that expand its functional repertoire beyond its canonical role in plasmin-dependent processes.

PAI1 affects fibrogenesis during the inflammation phase in -Tg skin. 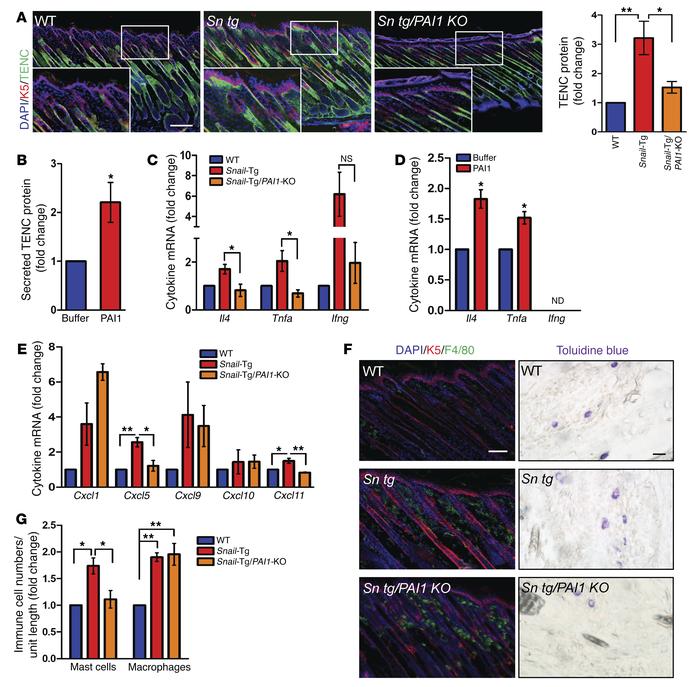